Meteorologists can predict Rape as well as Hurricanes

“Where crime is taught from early years, it becomes a part of nature. Or is Nature the teacher of crime?”

A Jump back into History

Before we go to the core of this Predictive Foresights Intelligence Briefing, we need to go back a few years, to the 1950’s to be precise. The time that the world had largely recovered from World War II, was in the midst of the Cold War. J. Edgar Hoover being through half of his career at the FBI. Capitalism and communism challenging each other in every possible way and the advent of the Space Race, starting with the successful launch of Sputnik 1 by the Soviet Union on the 4th of October 1957.

During this period, specifically August of 1955, a very interesting article was published in a magazine called “CYCLES”, headed “Cycles in Crime”*. This CYCLES Magazine was a recurring publication, published by the Foundation for the Study of Cycles, Inc. for its private members. This article was written by no less than J. Edgar Hoover, a distinguished member of the Foundation for the Study of Cycles.

During the years preceding this article studies had shown a remarkable correlation between seasonal changes and crime pattern. Police records, tabulated for five years in over 2.400 urban centers, revealed a clear rise and fall of criminal activities based on seasons. Hoover was very interested in these phenomena of predictive cycles and how predictive cycles could be used in predicting future events.

The Pattern of Crime

Hoover, in his article, produces different graphs from this police study, showing a startling link between seasonal changes in crime patterns for Murder, Rape, Aggravated Assault, Negligent Manslaughter, Burglary and Auto Theft, based on the five-year research data. In other words identifying “predictive cycles” or “rhythmically non-chance events”, which we like to call “Predictive Foresights“.

Shown below are the graphs reproduced from the original article. (To enlarge, click the image). 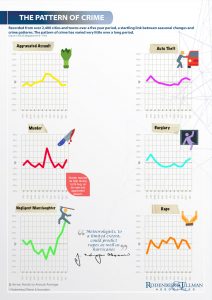 The Study concluded that;

Murders were seen to most likely happen during August and September at the northern hemisphere, warmed and increased hours of sunshine can be a good aggravator. Police studies also showed that murders were largely weekend night crimes and together with the increase warmed, sunshine hours and social activity a good mix to increase this behaviour in crime.

Rape, like Murders, also increased during the summer months. Research showed that Saturday and Sunday were the worst days, most likely also related to the increased social interaction for that part of the week.

Negligent Manslaughter was seen to increase during the winter months. Traffic killings were leading the list, most likely due to longer nights and unfavourable driving conditions.

Burglary and Robbery also increased during winter periods and seen increasing from December to February where it showed a peak from which it declines again. It could be argued that the increase of seasonal activities, like shopping purchases of valuable goods might make crime more profitable for that period.

Auto Theft occurred more often during cold months, however accessory thieves were most active in February, March and April. As Hoover explains; car parts are more valuable right after the new model cars appear on the market and accessory thieves are practically moribund in December. We can wonder if they would find more value in operating other areas of crime during the Christmas period.

Hoover also produced a graph of total none major crimes and this showed a clear decrease in January and May for these crimes. The “Merry Month of May“ gets a totally new meaning thanks to this.

Predictive Foresights on Burglary for the City of Chicago

Back to present day! Since the “Cycles in Crime” article was published in the CYCLES Magazine back in August 1955, the world has gone through major changes including the advent of computers. This has allowed us to find “predictive cycles” or “rhythmically non-chance events” much quicker. Imagine back than, it could take up to one month to find one cycle and draw this out on paper by hand. Today it only takes seconds to find many cycles in data-sets and have this projected on computer screens.

So what would happen if we would run a similar study to that done back in the 1950’s, what would we find using today’s technology at our finger tips? Can we find any “predictive cycles” or “rhythmically non-chance events”?

In the graph below, the Predictive Foresight line (Red) gives prediction over the coming month for committed burglaries in the City of Chicago. The “Realtime Value“ line (Blue) shows the real recorded burglary rates by the Chicago Police on a daily basis. Keep in mind, it is the “turning points” & “direction” that we are looking for, not the amplitude/height.

# Real time data retrieval is delayed with around 1 week by the 3rd party provider. This data is made available by the City of Chicago through it’s Chicago Data Portal, which we have no control over. Note; the Chicago Data Portal administration regularly updates is past numbers, so if their is a big difference in the Predictive Foresights line and the realtime value, this can be related to temporarily inaccurate uploaded realtime values.

How to use this knowledge?

Having access to this kind of knowledge is non trivial. Knowing when certain crimes might increase or decrease can help manage it. For example, people can be informed of the type of crime that is forewarned for a particular month in the year. Maybe, parking the car that month in the garage instead of the driveway. Crime prevention agencies can increase or decrease resources distribution and more effectively do its management on its resources. E.g. certain employees could be dynamically being positioned to handle different tasks depending on the crimes most likely to occur during that period. Insurance companies can dynamically adjust their insurance policies depending on the period they are active for. Managers, Professionals & Business Leaders can make short & long term adjustments to their forecasts based on over 80 years of science. Companies can stay ahead of their competitors by building a solid strategy using Predictive Foresights.

“To a limited extent, meteorologists can predict rape as well as hurricanes.”

What if we could predict future geographical locations or “hot spots“ with an increased crime rate?! – A. Wille

* If you like to read the original article “Cycles in Crime” published in CYCLES Magazine Volume Six – 1955, you can read it here: online

You can learn more about our Predictive Foresights™ Premium Service HERE.